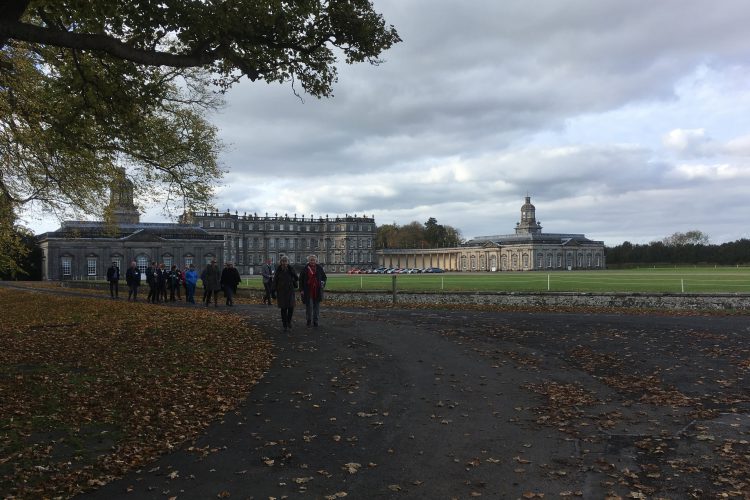 The HHAG autumn meeting took place this year in Scotland at Hopetoun House, South Queensferry and Blair Castle, Perthshire on 17-19 October. It was attended by representatives of 18 different estates. We were tremendously grateful to both Hopetoun and Blair Castle for their warm welcome.

Following our AGM at Hopetoun we were treated to tours of the house, archive and the Scottish Conservation Centre. We were also lucky enough to be given a tour of the beautiful walled garden by Lady Hopetoun who gave a fascinating insight into how the garden was created and continues to be developed. The day finished with an enjoyable dinner that was very kindly hosted by Lord and Lady Hopetoun.

An article by Peter Burman, Hopetoun Trustee & Archivist, giving further information on the Hopetoun Archive (originally published in the Scottish Council on Archive’s Broadsheet magazine) can be viewed here

The following day saw us move further north to Blair Castle where we enjoyed tours of the castle and the archives. We also had an opportunity to visit another spectacular walled garden and take in the impressive highland scenery.

At our AGM we discussed some exciting options for forthcoming Spring and Autumn meetings in 2019 and beyond, we will be posting more on these once details have been confirmed. The AGM also saw a motion passed to provide bursaries that HHAG members can apply for to help facilitate costs associated with visiting houses. The committee welcomed this opportunity to widen access to the networking and skill sharing that are such a central feature of the meetings.

This website uses cookies to improve your experience while you navigate through the website. Out of these cookies, the cookies that are categorized as necessary are stored on your browser as they are essential for the working of basic functionalities of the website. We also use third-party cookies that help us analyze and understand how you use this website. These cookies will be stored in your browser only with your consent. You also have the option to opt-out of these cookies. But opting out of some of these cookies may have an effect on your browsing experience.
Necessary Always Enabled
This is an necessary category.
Non Necessary
This is an non-necessary category.
Save & Accept